This document describes the use of the Merge testbed platform strictly for operating testbed facilities. A facility can be anything from a single computer to thousands of interconnected heterogeneous resources. A typical Merge deployment includes a centralized portal that presides over a set of testbed facilities. The Merge portal

We refer to these capabilities collectively as experiment space. Everything below experiment space that actually makes an experiment tick, the provisioning systems, isolated network synthesis, imaging
systems, etc. - we refer to as resource space.

The focus of this document is to delineate a path forward for a number of Merge use cases that revolve strictly around resource space.

In the end to end Merge setting, resources are proactively managed by resource providers through commissioning and decommissioning. When a provider wants resources to become available to experimenters, they commission the resources to a resource pool of their choice (or creation) in experiment space through the Merge portal API. From that point forward, experimenters who have access to that pool have access to the resources. Likewise, when resources are to be pulled
back, they can be decommissioned or deactivated by the provider. The former removes the resource from the facility model completely and is intended for situations like device failure or end of life. The latter is intended for more transient actions like device maintenance or temporary duty cycles off-testbed.

Merge is somewhat unique in this manner of proactive distributed resource management. Some other systems that wish to use MARS may employ a more reactive model, where a resource broker or centralized entity supplies a resource request and the resource provider gives back a response with the resources it can provide. For this model we recommend a middleware approach where a broker is placed between the Merge Commander and the experiment space callers. On the MARS side, this broker would implement the the Merge Commander API. On the experiment space side, the broker would implement whatever APIs are necessary for the callers in play - and translate the calls from that API into Merge Commander API calls. The Merge Broker could optionally implement the Merge Commissioning API to manage the availability of resources or take on the resource management APIs of the foreign experiment space. 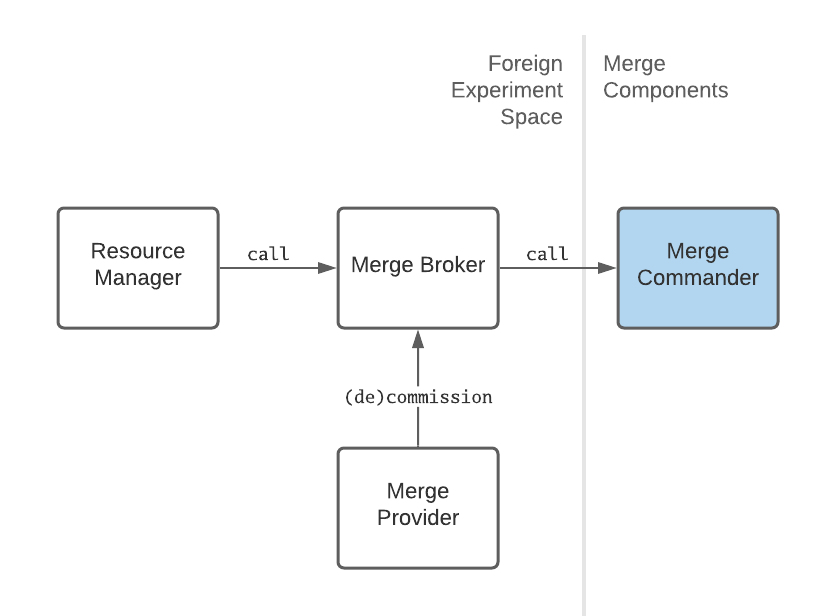 There are two planes of authentication and authorization for MARS.

These two APIs are handled differently.

This API is protected by TLS client certificate authentication. Any client that bears a certificate that warrants authentication is authorized to use the Commander API in its entirety e.g, combined authentication and authorization. In an E2E Merge system, when a new facility is stood up, the resource provider provides the Merge portal it’s a part of with a TLS client cert that allows that Merge portal to use the facility through the Commander. This is done securely via the Merge API which has an OAuth2 based authentication mechanism in place. Only a maintainer of the facility is allowed to provision certs through the Portal API.

In this case, a client certificate would be given to the Merge broker, either through a secure API or through some sort of administrative out-of-band process. The Broker would then have full access to the Commander API.

Implementing Merge style resource management is optional for a Merge broker. The discussion below provides high level guidance for doing so.

The Merge Commissioner is implemented as a containerized micro-service that runs inside a Merge portal. Unlike the authentication model described in the previous section for certificate provisioning, the Commissioner sits behind the Merge Portal API that performs authentication via an OAuth2 based mechanism. Once a user is authenticated by an Identity provider the Portal trusts, their request is routed through the portal policy layer to see if the user making a (de)commission request on behalf of a facility is authorized to do so. This policy layer is designed similar to Linux security modules.

In the foreign experiment space setting, (de)commission requests would not be going to the Merge portal, but rather to the broker. The Merge Commissioner service is a modular component of the Merge portal - and does not necessarily need to run within a Portal to function. Thus a potential Merge broker could use this Commissioning service as a building block if so desired for reactive resource management. Authentication and authorization would be up to the implementer. For simple scenarios, client side TLS certification will work just fine. Authentication and authorization could also be implemented to be consistent with whatever the experiment space side of things is doing.

When a Merge broker receives requests to provision resources on behalf of a foreign experiment space, it will need to translate the experiment element definitions into native Merge element definitions and wrap them in Merge materialization fragment request envelopes according to the element to resource mappings defined in the foreign provisioning request.